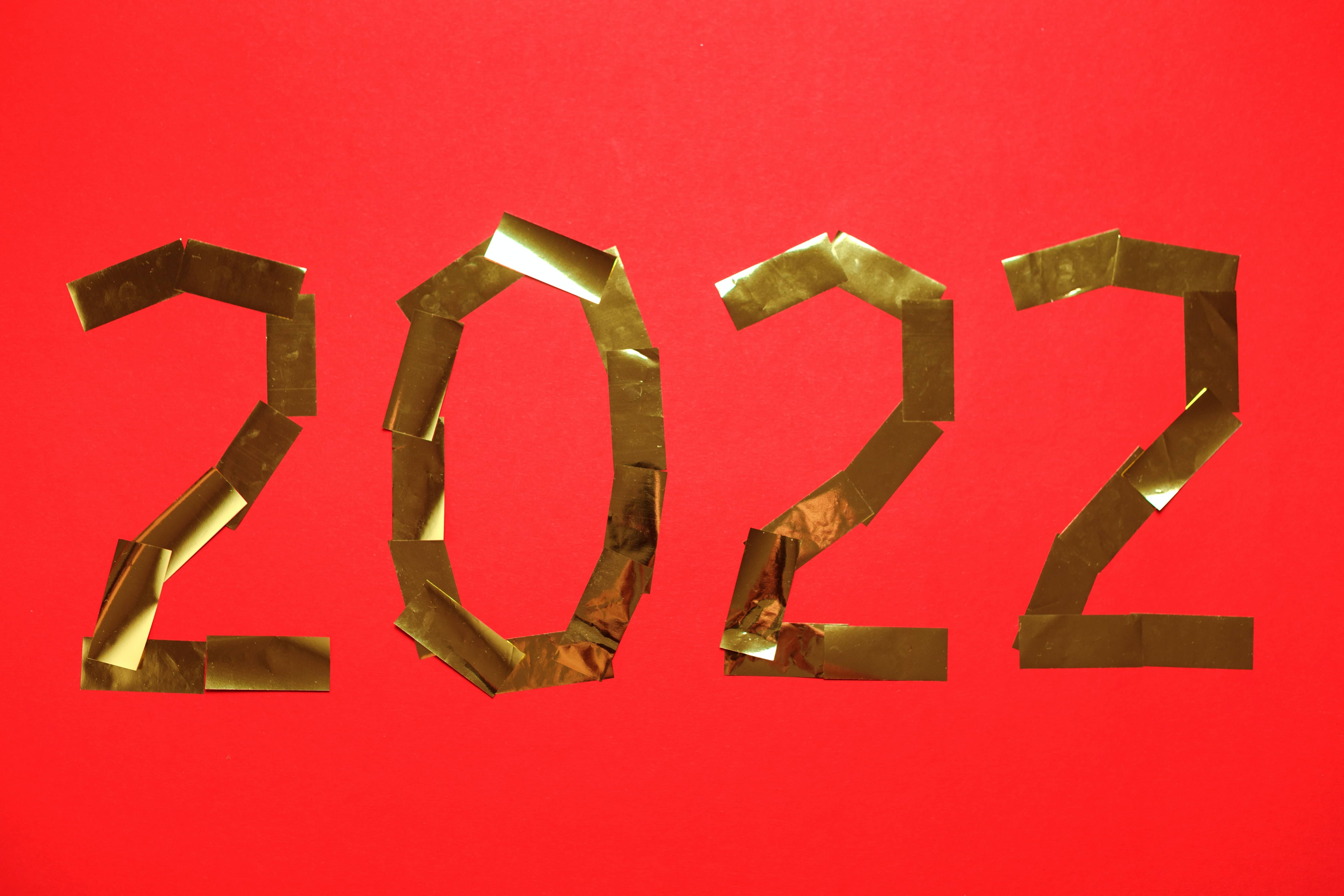 The biggest transformation happened in February 2022, when ENESTECH Software decided to pull out SENET from Russia and Belarus. ENESTECH was born in Ukraine with most of its core members working and living in Ukraine, so when Russia violently invaded Ukraine through Belarus, the company was quick in its decision not to support gaming venues in both hostile countries. Since March 2022, SENET is no longer available in Russia and Belarus, all accounts were closed, sales are stopped.

As of January 2022, Russia was one of the biggest markets for SENET – it was installed in almost 68% of all gaming venues across the country. Considering that there were around 2000 venues overall in Russia, giving up that big number of clients required fast expansion into new markets, and this was exactly what we did.

Over the course of the last year, SENET has established its presence in 23 new countries, including China, Great Britain, France, and Vietnam. It doubled the number of customers in the USA, got 100 more customers in Kazakhstan, and took Vietnamese market by storm. 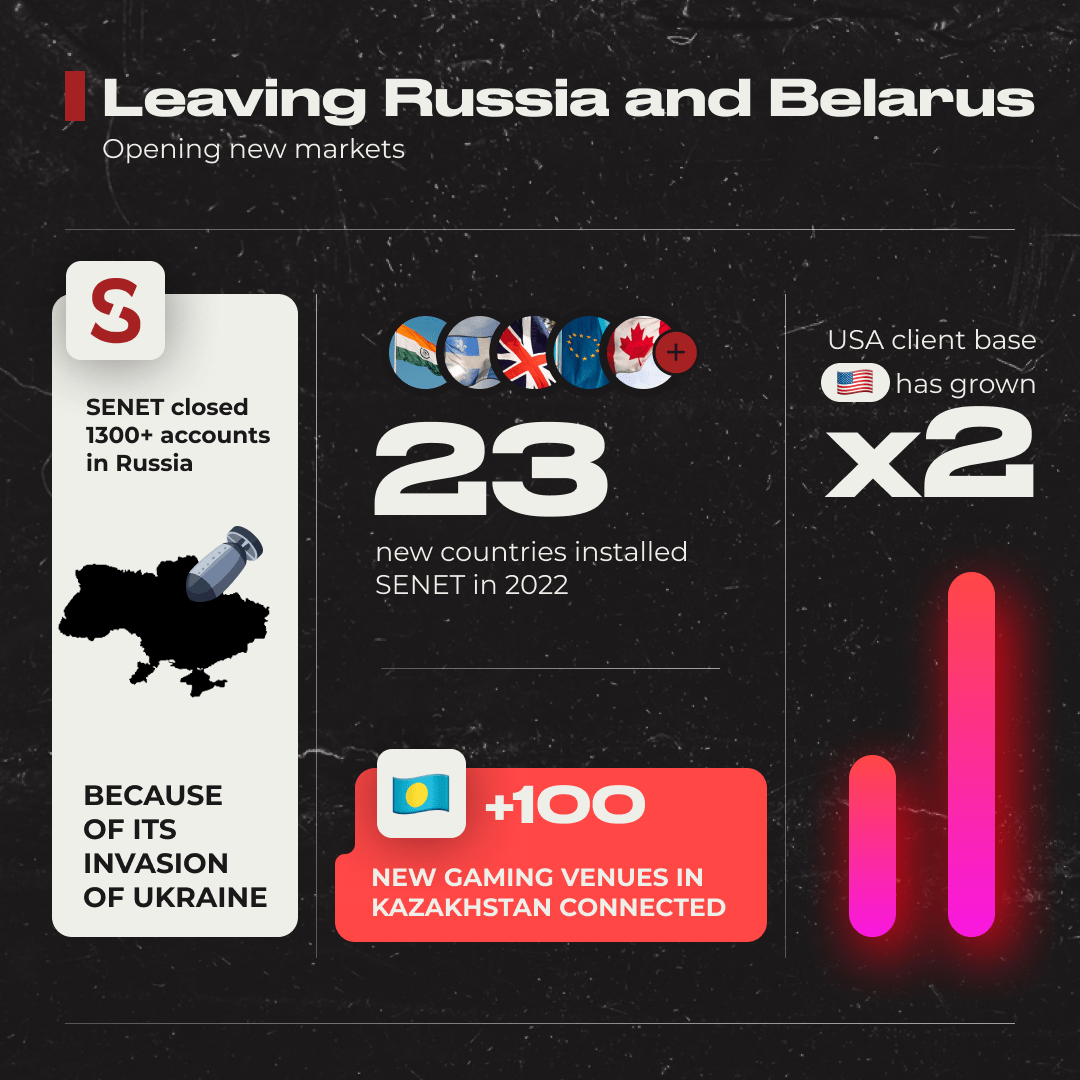 ENESTECH Software established a new legal entity in Vietnam in April 2022. In less than a year, SENET is already being used in biggest franchises of gaming centers of the country. With one of them, CyberCore, opening a brand-new premium location in the city of Ho Chi Mihn that runs on SENET management software from the day 1. This event marked the beginning of a new partnership, where almost 700+ CyberCore gaming locations might be soon transferred to SENET cloud solutions. 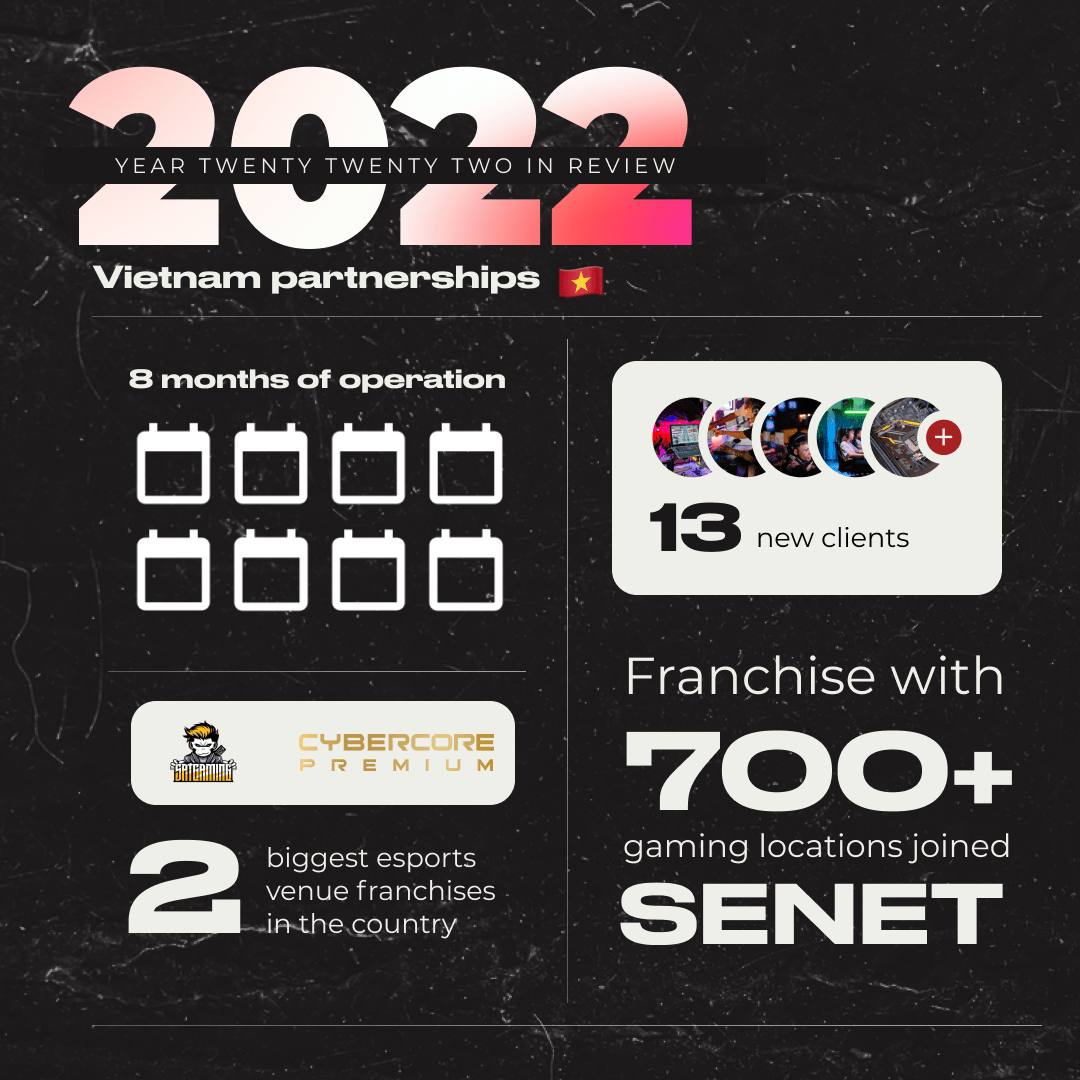 Universities, airports, and new use cases for SENET

Gaming arenas are popping up all over the world, including university campuses and airports. Universities are trying to assist students to build communities and bond over shared interests, while airports are doing their best to entertain travellers while in-between flights. 2022 has brought new use cases for SENET, signing up prominent educational institutions and massive airport hubs as SENET subscribers. 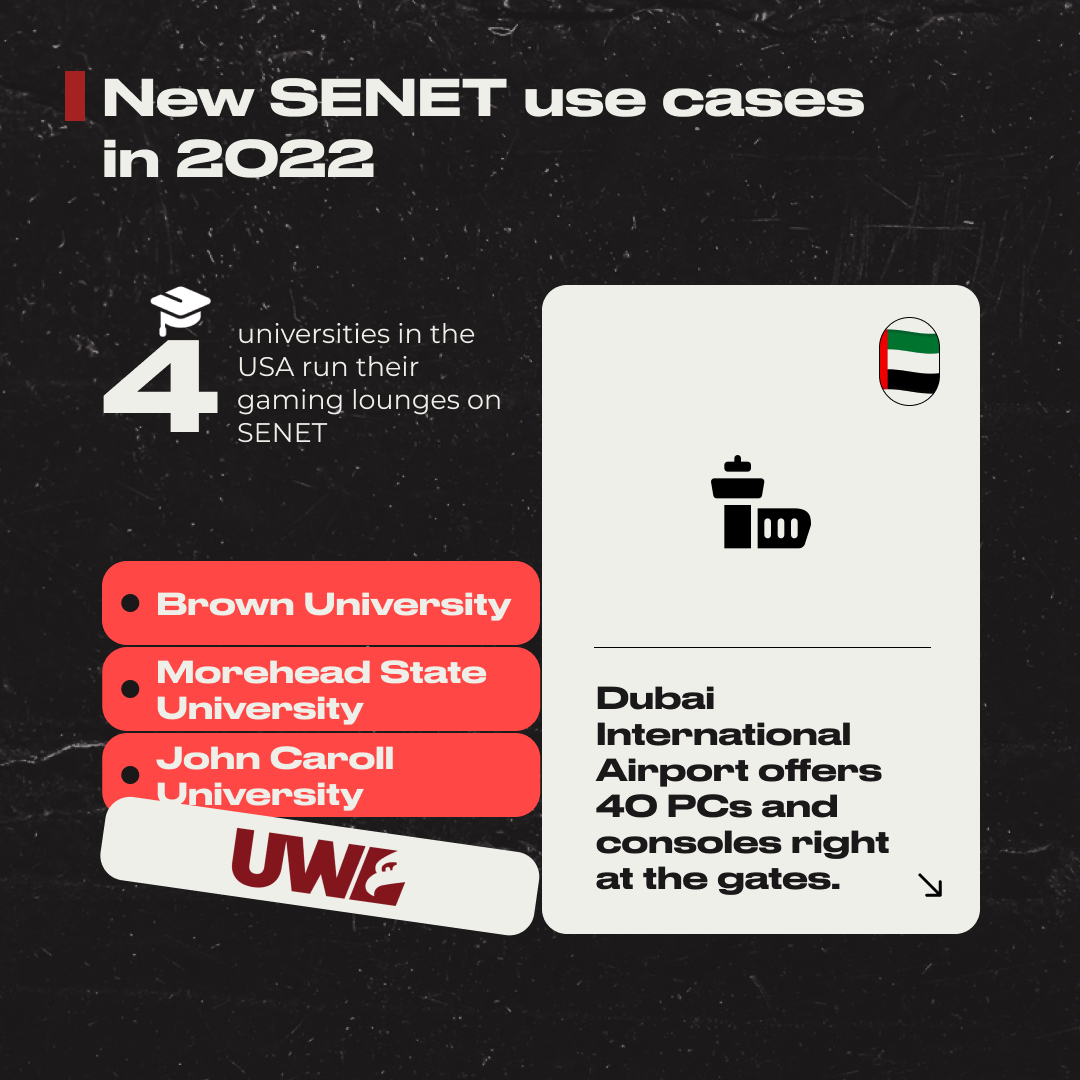 Four US universities are already using SENET in gaming locations that they set up for students on campus. Among them is Brown University with the biggest esports team in the Ivy League that decided to go with SENET for remote PC access and easy reporting about a gaming lounge they run.

In December 2022, Dubai International Airport opened a gaming space in one of the terminals, offering 40 gaming stations with PCs and consoles. It runs on SENET software and ROG hardware, providing unique gaming experience for those who wait for their flight.

With these new use cases, SENET has become even more flexible, making business automation truly possible for any gaming venue in any location.

Mood of the year: client-centric

Throughout the entire 2022, our Product team has conducted 56 client interviews and 17 surveys. SENET Backlog is now functioning as an additional platform for users to leave their suggestions for developers and to vote for ideas of other SENET subscribers. In 2022, communication with users has been improved significantly, so that new updates and developments within SENET could be based on real business needs of gaming venues rather than a guess.

As a result, 765 customer insights were analyzed by the team, 18 patches and 11 releases implemented, and more than 30 functionality improvements inspired by users’ ideas were introduced into SENET software. It’s a gigantic amount of work, and we once again express gratitude to all our customers that provide their expertise to our team. You inspire us to make a better product. 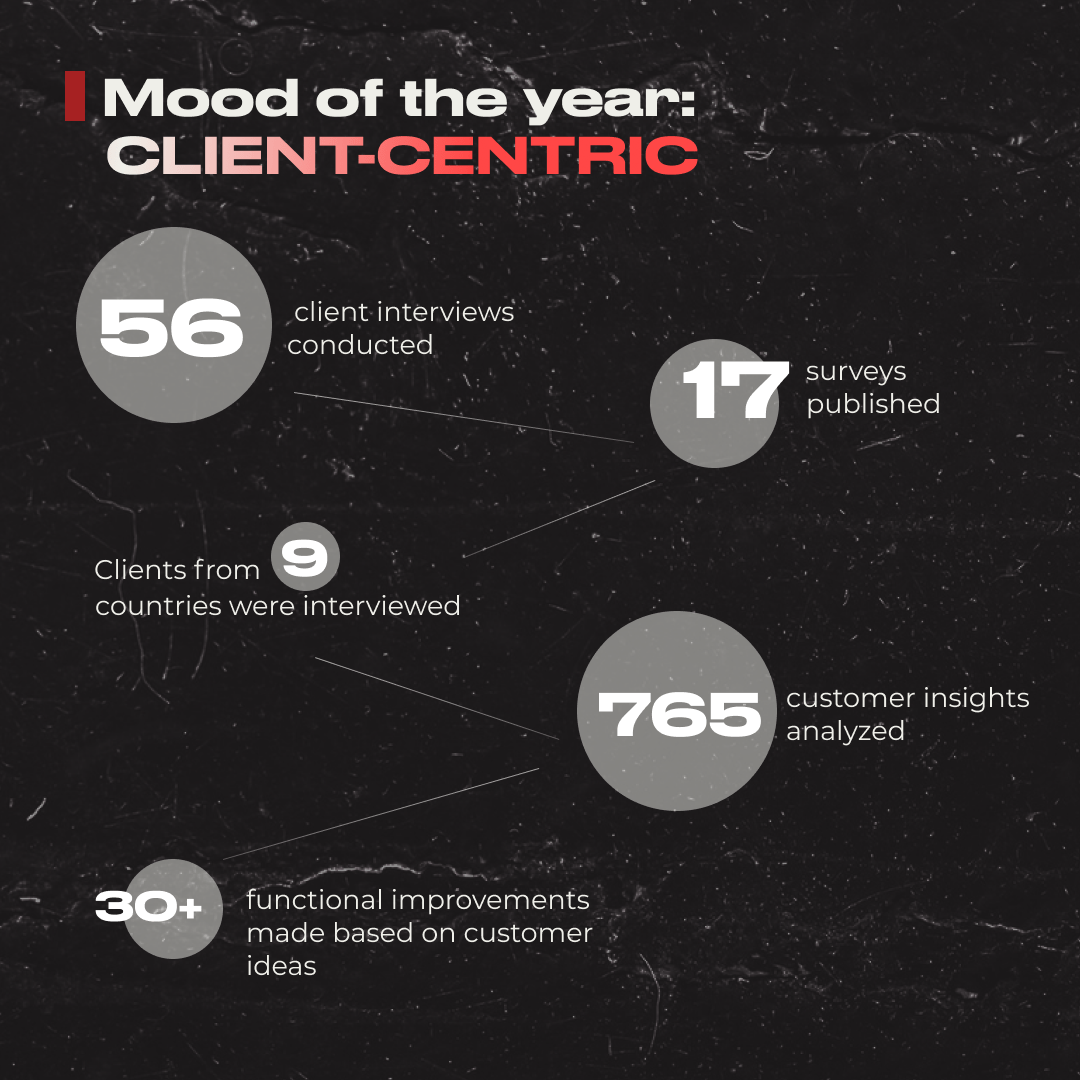 We’re proud to say that SENET has evolved during the last year. Client-centric approach allowed us to transform it into a more user-friendly and advanced software. We added 99 new features to SENET that include better mechanisms to encourage gamers to visit esports venues, more sophisticated digital storefront on client PCs, more powerful online seat reservation platform, multiple integrations with payments systems that are popular in different countries, and a completely new useful interface for SENET diskless system. 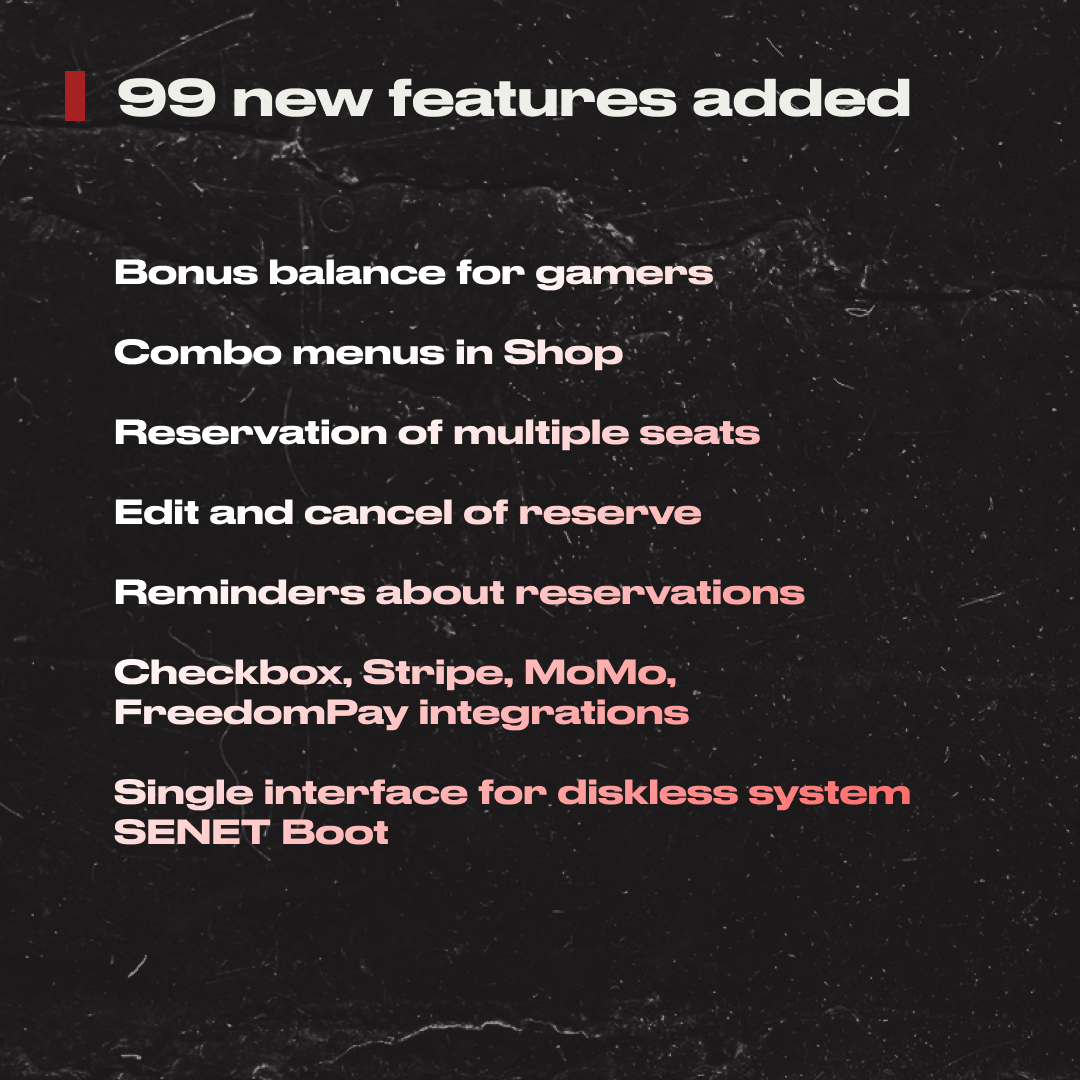 With all ups and downs, this was a good year for SENET. We are planning to continue our close communication with existing and potential users, putting business needs and gaming experience into the center of software development. We’re fired up to bring even more exciting features onto the platform, keeping up the momentum we gained in 2022 or accelerating it even more.