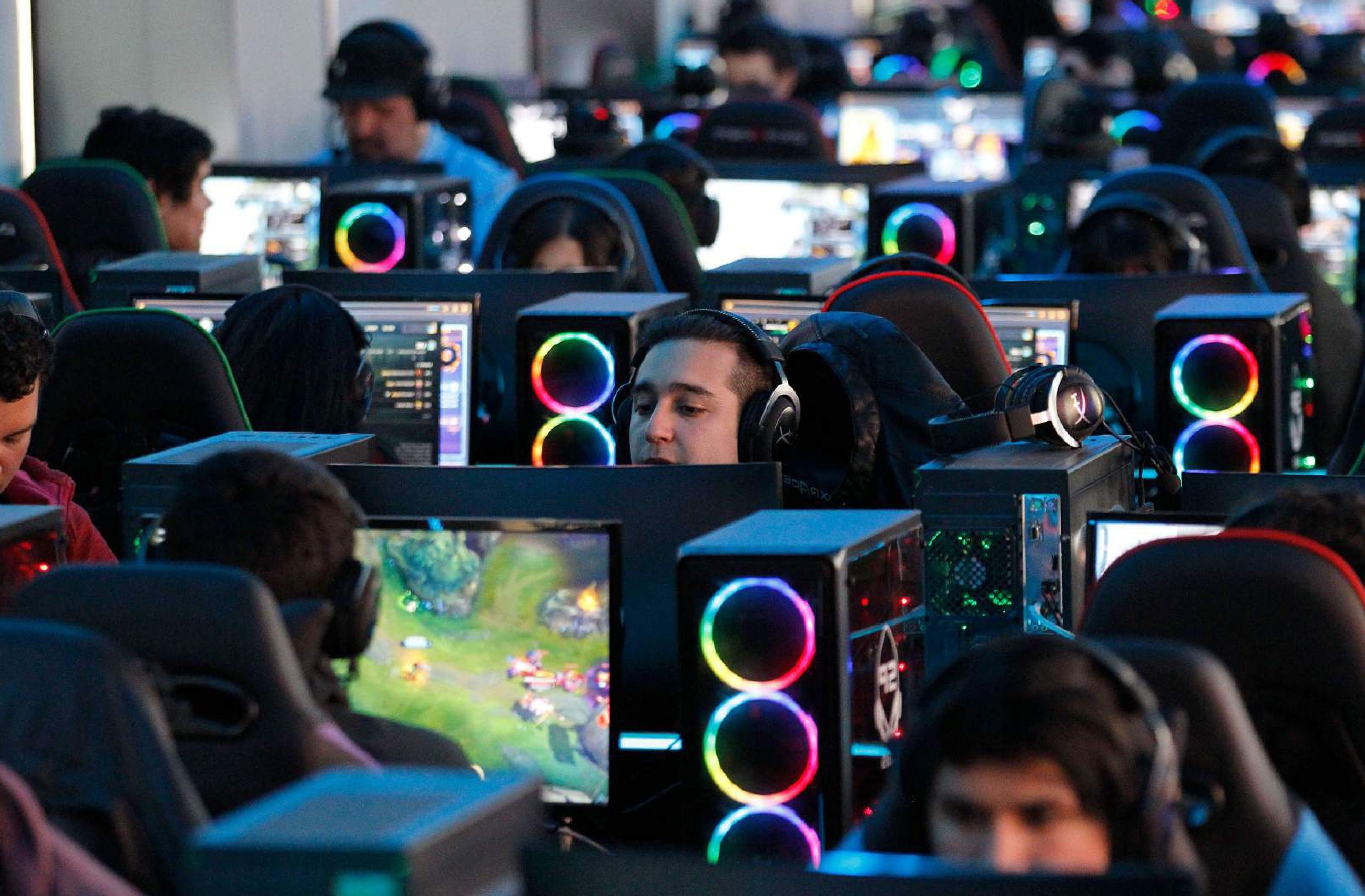 The gaming industry has become too extensive to be dismissed. Over two billion people all over the world consider themselves gamers, and video games bring enormous profit to tournament organizers and cybercafé owners every year. Gaming is not just a hobby – it is a sport and the main source of income for many great players.


Video games have become so widespread because of how exciting and easy to get they are. The fans can play at home, in Internet cafés, and at tournaments. They use PCs, laptops, consoles, and even smartphones. Cybercafés and game lounges are a popular place for video gaming because they provide a quality internet connection and socialization in a circle of like-minded people.

An important place in your computer cyber cafe business plan belongs to games that you are going to offer. The library is to contain the most popular and new products to keep up with the taste of the audience. Besides, you also need to take care of a commercial license. It allows you to provide gaming services legally, and your customers will be able to participate in tournaments. Meanwhile, we offer you to consider several factors, which can affect the choice of games for your cybercafé, and learn what products will bring a real profit and full-house to your gaming establishment.

Esports is a broad concept describing competitions, bets, and other activities related to video games. Same as with regular sports, e-sports have teams, tournaments, and fans. It is a profitable industry and business for game developers, the best players, and event organizers. The success of the games, tournaments, and teams is determined by the number of people involved and the level of their engagement. It defines how many views and what prize pool a particular game gets.

The popularity of eSports varies by country and region, as well as the popularity of genres and games. In the first half of 2020, the United States was the leader in eSports, with a total prize pool of $7 million. It was followed by China ($3 million) and Korea ($2 million). The most popular games in the USA are Dota 2 and Counter-Strike. As a rule, the majority of eSports games are played on computers; however, gamers also utilize consoles, smartphones, and tablets.

Below, there are top esports games, which have been highly popular in cybercafés in 2020.

Dota 2 was released in 2013 as a sequel to the classic Dota game. It reached a peak of its popularity in 2016. In March 2016, about 1.29 million gamers played Dota 2 simultaneously. Its special strategy-based scenario, which changes in every round, and a lot of details excite players. Dota 2 has reached the highest winning prize over the last few years, which grows every time. Many Dota 2 tournaments take place during a year, and this keeps fans engaged, thus helping the game to maintain its vibe.

The skills required to win along with the great gameplay and graphics have brought CS:GO to the top of the most played esports games. The gamers play as a first-person within their terrorist and counter-terrorist teams. The frequent updates, famous events, and the large market with weapons and accessories keep the fans loyal and interested in tournaments’ results. The biggest CS:GO competitions, such as ESL: One in Rio and Cologne, IEM in Katowice, and World Electronic Sports Games in China, have gathered millions of views and huge winning pools.

The well-known multiplayer game captured gamers all over the world almost instantly after the release and has gathered about $80 as a winning pool by today. In 2019, the Fortnite World Cup was organized in New York, which attracted a lot of attention to the game. Though the competition was canceled in 2020 because of the pandemic, the fans hope the great event will take place in 2021. In 2020, Fortnite has an audience of about 350 million gamers.

League of Legends became the most popular video game in the world within a few years after it had been launched. The gameplay is divided into seasons, each of them lasting about a year. At the end of a season, the LOL World Championship is held, where the best teams compete. In 2020, the Championship started on September 25 and lasted until the end of October. Every year, the LOL winning pool makes several million dollars.

Rainbow 6 Siege is a promising tactical shooter, which gets high positions in Esports games ratings. The gameplay is based on fights between assault squads and a defending side. The game started to participate in world championships in 2016; the first tournament was the Intel Extreme Masters. In 2020, Rainbow 6 Siege got the biggest winning pool in its history, which amounted to $3 million.

A cybercafé is a venue that provides services for playing video games; it is supposed to have all the necessary means for comfortable playing. As a rule, such cafes have sufficient space for playing and a high-quality web connection. Some cybercafés focus on PC games solely, while gaming lounges provide mixed services, with PCs and consoles to choose from, or only consoles. The latter has many advantages for both the owners of the gaming business and the players. The consoles serve for a long time, and there are many amazing games that are not supported on PCs. Let’s take a closer look at the most popular console games.

Call of Duty: Modern Warfare is an extremely realistic shooter, the 16th and one of the most successful installments of the Call of Duty series. In the first three days after launching, the game gathered $600 million in sales. In 2020, Modern Warfare got $6 million as a winning pool in tournaments. The game can be played on both PCs with Windows OS and consoles.

DOOM Eternal was launched in May 2020, yet it has already proved to be one of the gamers’ favorites. It is a fantasy shooter where protagonists fight against hell forces and use futuristic weapons. The game runs on Windows OS, PlayStation, and Xbox. DOOM Eternal has increased the rating of the whole DOOM Franchise, and it favorably stands out among other cybercafé games.

Final Fantasy VII Remake is a role-playing game, a remake of the original 1997 release. The events of the game take place in a magical world with futuristic technologies, and a group of rebels is in the center of the plot. Square Enix has issued the first part of the game in April 2020, exclusively for consoles for 1 year. Final Fantasy VII Remake has become the most popular game for PlayStation 4 in 2020. Within three days after the release, it collected $3.5 million in sales.

Half-Life: Alyx is a unique first-person shooter that needs “gravity gloves” to play since it’s a VR game. Half-Life: Alyx is based on two previous releases in the series that can only be played on Microsoft Windows or Linux. The gear used for playing was sold out in the first week of the release.

The Last of Us Part II

The second part of The Last of Us is a post-apocalyptic action single-player game, which was recently launched in 2020. It was released on PlayStation4 only; four million units were sold during the first weekend of sales. The game received great critics’ reviews, a high rating, and several awards.

Other Popular Games to Pay Attention

Besides the mentioned games, which are at the top of every cyber cafe games list, there are other products deserving of your attention. They got players’ commitment all over the world. The news and updates of these games always attract a lot of attention, so they will definitely have a good impact on your cybercafé business. Learn more about these games below.

Grand Theft Auto V says it all. The fifth version of this remarkable game has won multiple awards, being the fastest-selling game in history by reaching $1B in sales in the first three days and $800M in the first day of its release. Numerous independent review sites and platforms have consistently rated the game 9/10 or higher (97/100 & 10/10).

Apex Legends is an award-winning first-person shooter. During the first week of its launch, the game reached 25M users. It is broken down into seasons/legends where players are exposed to new characters, gear, and settings. One thing to note is that the game features gay and non-binary characters, which were greatly praised by critics.

FIFA 20 is a very popular football/soccer sports video game available across multiple consoles and systems. The game features the VOLTA concept, which focuses on street football/soccer. A player is able to choose their stadium and character while customizing their character’s attire. The game has won several awards and much appreciation from soccer fans.

NBA 2K20 was released in September 2019 as a single and multiplayer basketball game that works across multiple consoles. Also in 2019, it won the Best Sports Game award by Titanium Awards. The game received great players' and critics’ reviews. NBA 2K20 allows you to choose real players within the NBA or to create your own to play.

What Games Should Be in Your Cyber Cafe

If you want to start a cybercafé business, the games you offer to customers will play one of the leading roles in your success. We have created a list of the top 10 esports games after interviewing our customers. Below, you will find the games most often played in cyber cafes, gaming lounges, and computer clubs, regardless of what equipment is needed for them — a PC or console.

Regardless of top lists, reviews, and ratings, you should make a choice based on the needs of your target audience. Take into account if they are fans of old-school shooters or gamers who follow the latest trends; whether they are loyal to one game or interested in several options. However, when you are going to start a cyber cafe business, you probably won’t go wrong with offering most of the games from the list above.

Considering the latest trends, the gaming industry is going to grow and attract more enthusiasts. The possibility to compete, have fun, and be social by using a computer or console is very attractive in the world of rapidly evolving technologies and remote connections. Thus, opening a cybercafé may appear to be a great investment.

While several factors affect the success of this business, the most important of them is a library offered by a gaming establishment. A prosperous enterprise will certainly provide the hottest games and timely updates. Besides a quality cyber cafe management system, it’s also vital to consider your target audience's preferences and always stay relevant to the trends.