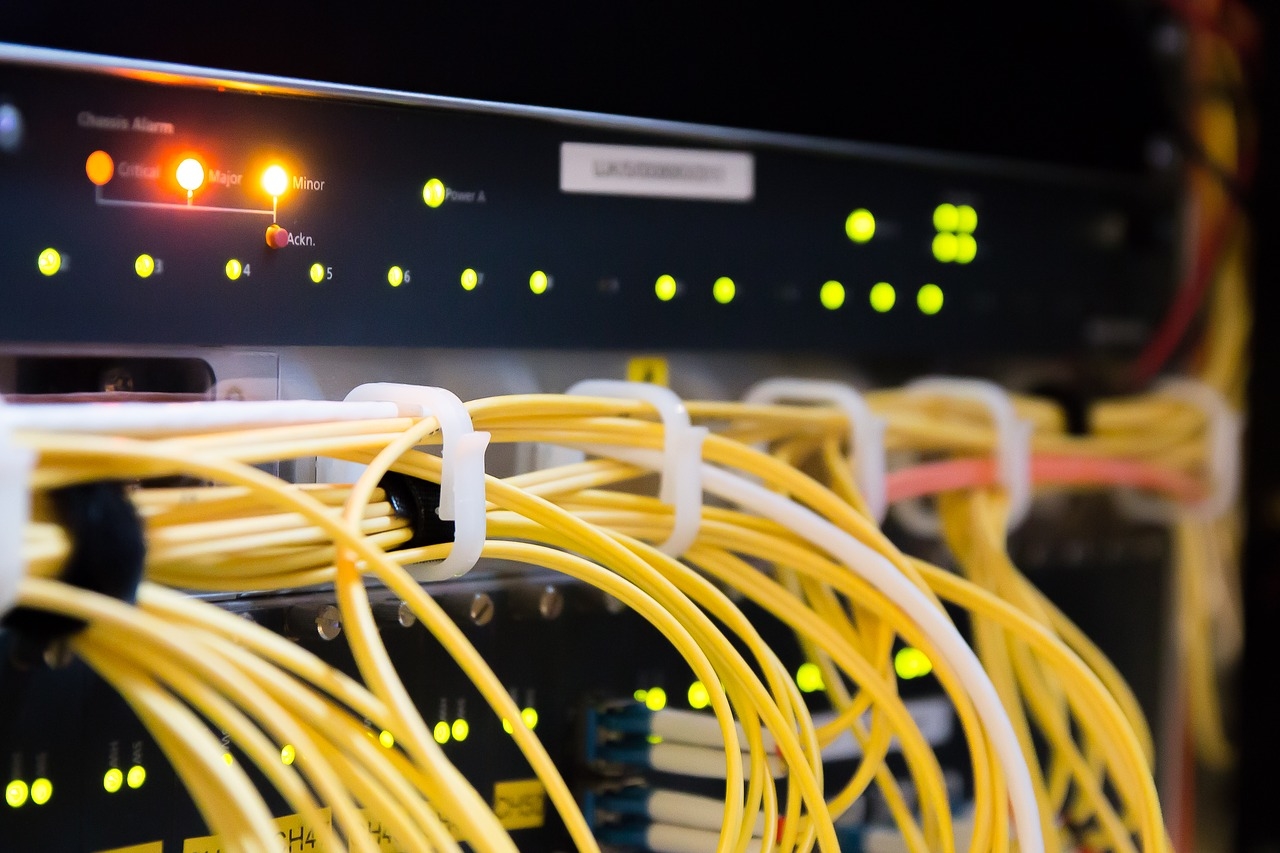 How much time do you spend on game updates and how much money does your venue lose on it?

At gaming venues, every minute spent on software updates is a waste of a valuable money-making resource – time. Games are getting heavier, their updates are not shrinking either, while esports venues are increasing the number of computers to offer to the public. It is not an easy task to keep licenses on all machines up to date, especially when new releases are as gigantic as 150 GB.

Modern cybercafes use PXE boot, or diskless boot, to save time and effort of their staff, making changes to the operational system or other software on multiple computers within minutes. In this article we’ll talk about the technology and how to set up a diskless cybercafe with the help of SENET Boot.

What is a diskless system?

Simply put, when a personal computer doesn’t have a hard drive or an SSD, booting its system over the network from the server – this is what we call a diskless system. 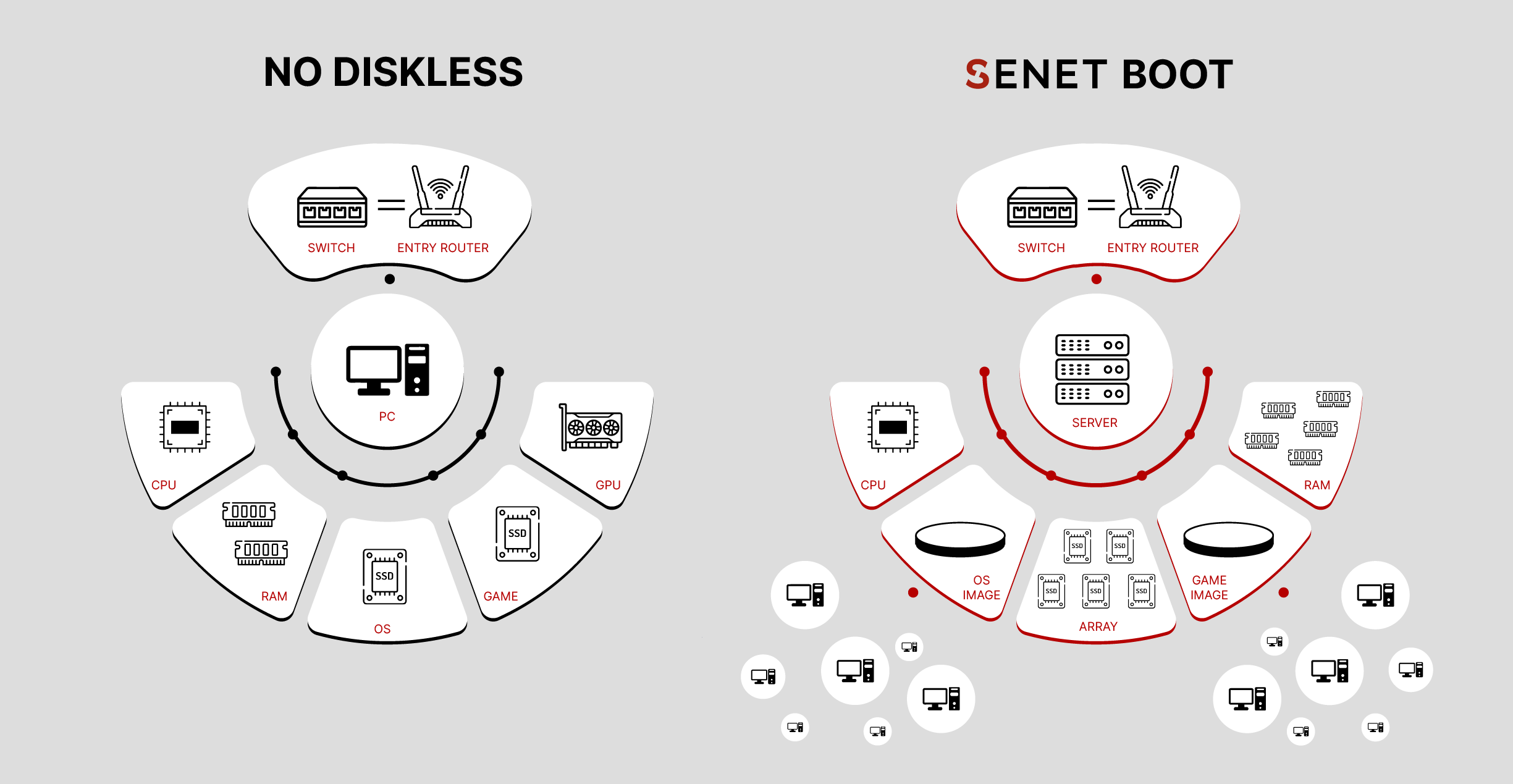 Most big organizations that have a lot of people working at computers running the same or similar programs usually choose diskless PC setups. Diskless software helps them to configure hundreds of such setups simultaneously, making computer maintenance easier, bringing down the expenses on hardware upgrades, and decreasing the number of IT personnel needed.


How does diskless system work?

Diskless system is comprised of one server computer and multiple client computers that are connected to it over the network.

Out of all computers, the server is the only one that has physical drives to store data, including operational system and software installed. While client computers don’t have any software on them, they use a snapshot of system configuration that is stored on the server.

Diskless boot is important for gaming venues for several valid reasons. First, it’s an effective way to save money on hardware upgrades, especially for those that have hundreds of PCs at their center. Even with expenses on large-capacity drives for the server, diskless setup is considerably cheaper than a purchase of hundreds of SSDs.

Second, any malware that gets into the system of a client computer has no impact on computer health. It gets deleted right after reboot – all because diskless nodes operate on images of system stored on the server.

At last, gamer credentials, logins and passwords they input on Steam and other platforms, cannot be remembered on client computers, even if ‘Remember me’ box is checked. When paid gaming time is over, and customer ends his client session, all remembered credential info is deleted upon computer reboot.

The biggest improvement that diskless server brings to a gaming venue is efficiency. Software updates take minutes instead of hours, there’s no need to walk from one PC to another, and maintenance breaks don’t cost business owners too much anymore. Diskless system allows to update software once – afterwards, all changes will automatically cascade onto client computers in a blink of an eye.

Diskless is good for gaming, as well as for other operations on a personal computer. Applications run well and smoothly, just as if you have them on local hard drives of the machine.

What is SENET Boot?

SENET Boot is a proprietary software for diskless boot developed by ENESTECH. It was created for gaming lounges, LAN centers, esports venues, and cybercafes that have a need to automate routine updates of games and applications on dozens of computers.

Benefits of SENET Boot comparing to other systems

Main advantage of SENET Boot is in its integration into the cloud platform for esports venue management – SENET. With SENET Boot, the entire platform becomes one single interface for the staff and business owners to manage all computers at gaming venues. SENET includes options of remote access to machines and simultaneous software updates, license pools for games, user account management, and much more.

SENET Boot is available for all SENET subscribers. Unlike other system providers, our support team works globally, speaks 7 languages, and is available 24/7 to help with installation of diskless Windows system via SENET Boot.

How can SENET Boot help your business?

At gaming venues, time is money. SENET Boot saves valuable time on software and game updates that would take hours to install on each computer. With diskless network, cybercafe business can operate 24/7 with a small maintenance break once a week, attracting a bigger amount of people that spend more money on gaming time.

SENET Boot is also a reason your business doesn’t need a lot of IT-personnel – one person can manage software updates on 30, 80, and even 120 computers.

Also, diskless system cuts expenses on SSDs for big venues. I It is cheaper for them to invest into a high-quality server with a few large-capacity drives, rather than buying a hundred SSDs and spending money on their upgrades later.

As with any other system on the market, the first step to a diskless internet café or gaming venue is to purchase suitable hardware for the server. We listed our recommendations on disk capacity, latency, and other hardware specifications below in ‘System requirements and management’ section.

When your hardware is purchased and connected, contact SENET team to install software and configure the system.

How to install SENET Boot in my gaming center?

All SENET subscribers can purchase SENET Boot as an addon and request installation files with access codes through support chat.

If you’re not a subscriber yet, just fill in the form with your contact information, so that we can provide you with access to SENET cloud services, including our diskless solution.

Afterwards, our team conducts a full range of setting up and configuration services, so that SENET Boot works flawlessly at your gaming venue:

How do I set up diskless boot?

To set up diskless server, you need a motherboard with at least 16 GB of RAM. While choosing a processor, we also recommend prioritizing the number of cores and threads over higher frequency.

It is necessary to purchase several physical drives of large capacity to make sure that your server has enough storage to save data for all computers at your gaming venue.

We recommend to distribute different information on different drives for better file organization:

If you decide to use RAID technology to optimize system performance and to secure storage of data, SENET team advises to choose RAID10/RAID1 over RAID5/RAID6 and their variants.

When it comes to RAM module, it is better to have memory with error correction installed – ECC type. Minimizing the possibility of errors prevents from data loss on the server.

How do I setup a diskless workstation on Windows 10?

If you plan to go forward with SENET Boot, client computers at your gaming venue must run on Windows 7x64 or Windows 10x64 Pro. Minimum size of RAM on these computers should be 4 GB and LAN adapter bandwidth capacity of 1 Gbps. Also, SENET Boot doesn’t support diskless workstations with WiFi network controllers (NIC) or those that boot over USB network controllers.

Disable TPM module on motherboards, if there’re any, as they will interfere with the diskless system.

What is the use of writeback in diskless?

Writebacks are temporary files that are created while operating on a diskless node, or a client computer. They contain information about all changes that are made to the system of a client computer when it’s on. However, once the computer is turned off or restarted, diskless system removes writebacks and all data they stored, booting operational system in its primary non-changed state.

Here’s a list of recommendations for hardware setups that we came up with, so you can utilize SENET Boot at your gaming venue.

Diskless systems are essential to gaming venues that strive to grow big and work with no interruption on maintenance breaks. Diskless software solutions, like SENET Boot, allow update games on hundreds of computers fast, protect operational system from malware, and save some money on personnel and SSDs.

In comparison to other diskless boot systems, SENET Boot stands out with its user-friendly interface and global customer service. To set up SENET Boot, leave us your contact information on our website or text customer support if you’re a current SENET user.