The Biggest Internet Cafe in the World

Long gone are those days when we had to go somewhere for a computer and pay hourly to connect to the Internet. With homes full of gadgets, Wi-Fi-equipped coffee shops, and the mobile web available in virtually every corner of the earth, we seem to have no need for dedicated venues providing Internet access to the public. So, are internet cafés dead? Not at all! Moreover, new businesses pop up all over, especially in Asian countries, while apparently transitioning from the traditional form to the new model of shared multi-gamer spaces. Let’s examine the highs and lows of the Internet café industry and capture its promising trends.

Actually, the Guinness book doesn’t currently provide any records of the largest Internet cafes. Why? Because venues that had owned the title were all closed by now! But their history perfectly reflects how IT technology and associated business models change with times, and we need to explore it and learn the hard lessons.

Initially registered as easyEverything, this business was conceived by Greek-Cypriot enterpriser Sir Stelios Haji-Ioannou, also known as a founder of the multinational easyJet low-cost carrier. Developing the idea of easy-to-access services on the global market scale, he caught the digital spirit of the times and launched the first round-the-clock cyber café under the brand in 1999. 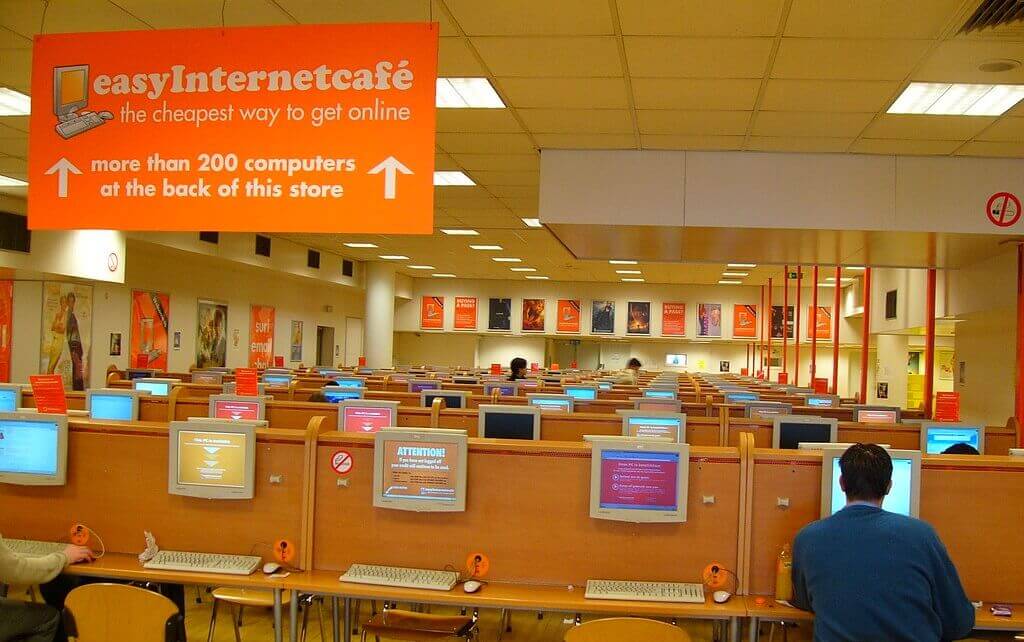 Unlike most of the traditional Internet cafes, the spot in London provided an airy space of nearly 10,000 square feet with 400 screens and high-speed Internet access priced dynamically. While setting much lower hourly rates (up to 80%) than competitors, the business model implied flexible prices based on the number of users. The more customers use the services, the higher go the hourly rates and vice versa. For example, a user might get three hours of the Internet connection for a dollar paid during off-peak hours or just 15 minutes of access for the same price at peak load.

Within several years, the outlet expanded to Paris, Rome, Madrid, and a dozen more destinations, covering all major European cities and, eventually, spreading over the ocean. In 2000, the expansion led to the launch of easyEverything’s spot right in the heart of New York. With 800 flat screens supplied by Hewlett-Packard and lined up across two floors of 18,300 square feet, the Internet café got into the Guinness book as the largest in the world. Apart from online access, the store offered extra services, including printing, downloading, and Web cams, at an additional charge.

However, neither the new approach to pricing nor the Guinness certificate helped the Internet cafe keep the lights on. It was closed somewhere in the middle of the 2000s without much ado, while the easyEverything chain, later rebranded easyInternetcafé, became a franchise still having over 70 stores across Europe.

Another sad story about the largest projects in the field that failed to survive comes from Nigeria. It started in 1985 with the launch of the privately-owned Information and Communication technology business Chams. Over the following years, it managed to grow into a reputable PLC focused on identity management and transaction payments. Here, you may start wondering how these business areas are connected with cybercafés, but the answer is simple – in 2009, Chams PLC entered the agreement with the Nigerian government to implement the National Identity project across the country. 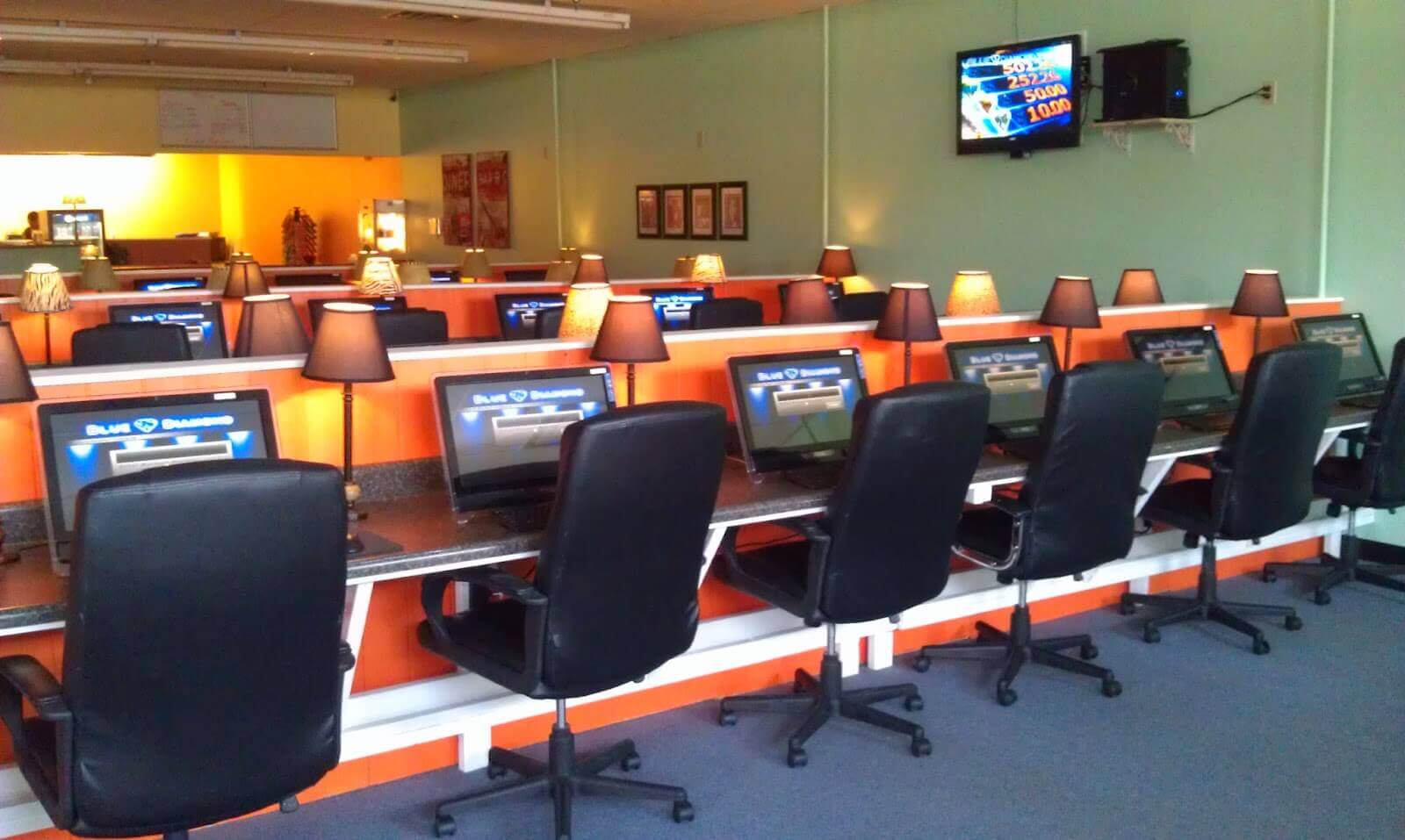 To that end, its ChamsCity subsidiary opened four digital malls, which provided access to multiple online services, including electronic payment solutions, video conferencing, e-tutoring, and, of course, Internet surfing. In addition to computers, the centers housed self-service terminals and ATMs to deliver the whole bunch of IT solutions under one roof. Accommodating over 1,000 screens each, the malls in Lagos and Abuja were recorded as the largest Internet cafes globally.

As you might guess, the malls’ operating costs failed to meet occupancy, and ChamsCity moved some of its services elsewhere and closed the spacious facilities, with the last one shut in 2015. Moreover, the shareholders lost nothing less than 9.2 billion nairas, which makes 24 million in USD.

So, is it that bad? Do we have to say goodbye to huge halls stuffed with computers and settle for smaller spots, which somehow keep afloat somewhere out in the sticks? Far from it. Let’s see into the current holder of the largest online gaming center title – Inferno Online. 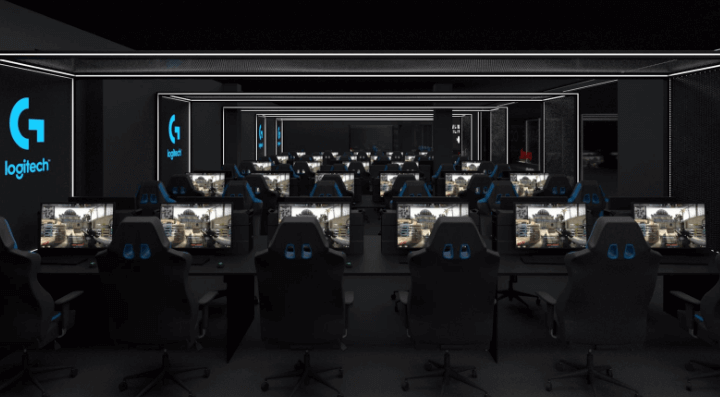 The Swedish spot, located in the country’s capital city, got the Guinness certificate in 2010 for 342 seats equipped with Phillips’ screens and Steelseries’ accessories. More than ten years later, the center has been still thriving, now managing four venues across Stockholm and hosting multiple e-Sports events. It features transformable rooms of different floor space and seating capacity, works days and nights, and provides patrons with not only all the necessary equipment but also snacks and soft drinks.

Yet, Inferno is not the newest huge gaming center on the scene, and Europe is not the only destination for gamers seeking social interaction. For example, Helix eSports claims to be the largest dedicated e-Sports hub in the USA. It opened the first venue with 150+ gaming stations in North Bergen in 2019, followed by another spot in Patriot Place with over 100 additional units. The business is doing so nicely that Helix is about to open the third location.

But the real spree is in Asia. The Wolfz esports center (Shenzhen, China) hit the market in 2017, offering over 18,000 square feet of state-of-the-art space packed with 230 gaming units. It is suitable for both watching live-stream tournaments and playing favorite games in a more social setting. What is more, the Philippines made it to the top in 2020 by opening cutting-edge TNC Cebu HQ boasting over 400 Acer Predator stations. Now, TNC can claim the title of the largest cyber café in both Southeast Asia and the world. 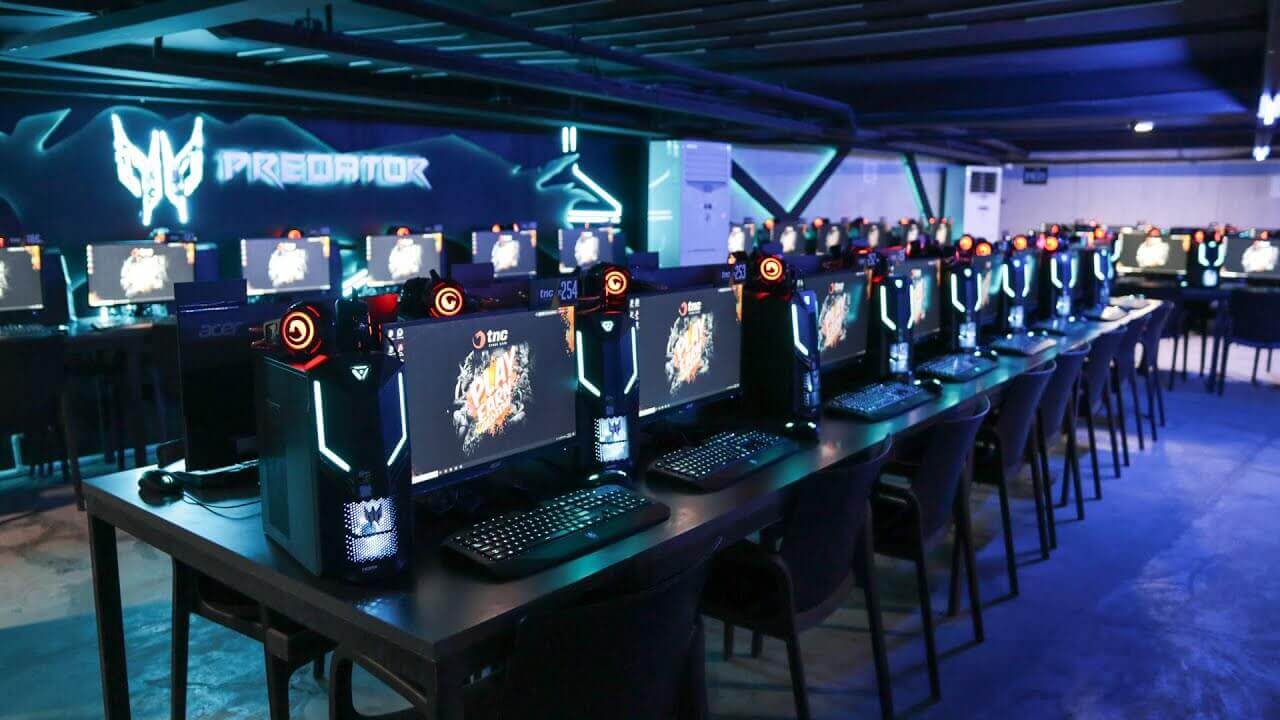 The trend is obvious – the king is dead, long live the king! While traditional Internet cafes are left to draggle in some locations, the gaming destination gains momentum. As the popularity of eSports keeps growing and top-of-the-line gaming equipment remains unaffordable for many gamers, modern cyber cafes can offer a required environment along with extra services for the community. So, this is not the end of the story, and you may be the one to get on with it.